From the hexagonal shapes of a bee’s honeycomb, to the scales of a fish, to the spiraling of a nautilus shell and the neural networks of our human brains, all of Nature is composed of intricate patterns and forms known as sacred geometry.

Like a hidden language or code, sacred geometry is where science meets spirituality. It is a mathematical representation of certain types of patterns that gives us a way of seeing into the interconnected fabric of Creation.

The fundamental equations and patterns of nature are within us as well as part of us. That means whenever we see it, it automatically resonates. Sacred geometry speaks to us in a non-linear and inter-dimensional way by creating resonance with the roots of our very existence. That’s because we humans, like everything else in Nature, are built with sacred geometry.

Leonardo da Vinci and other Renaissance artists often incorporated mathematical formulas in their art to create a visual aesthetic of harmony and perfection. In fact, many of the great masters, either intentionally or subconsciously, created works with inherent symmetry based on such “formulas” of beauty. Leonardo’s Mona Lisa and The Last Supper are examples of paintings that keep calling us back, again and again, to take another look because of this underlying and indescribable quality that sets them apart.

I like to think of sacred geometry as something that exists in a hidden dimension but manifests in the physical world. It is the mathematically constructed pattern that is hidden from view and not overtly obvious, like the “bones” or a skeleton of a thing. It is the underlying structure upon which an entire art piece (or a flower, or a shell or a honeycomb) can be supported and built on to create a certain outcome.

In my own art, I often create pieces deliberately based on sacred geometry (like my Elemental Series of paintings) but I also love the challenge of making art where I am guided to find the natural symmetry organically, simply by intuitively following my feelings and an inner knowing.

Using geometric patterns and, in particular, the circle or mandala form, as the foundation of my artwork, is my way of paying homage to Nature’s brilliant organizing principles and to the original Creator.

I love working with one particular pattern in sacred geometry known as The Seed of Life or the Genesis pattern. This simple yet powerful “matrix” is believed to contain the blueprint for all of creation because every geometric shape can be constructed from its simple formula of six circles surrounding one. The hexagonal structure of the Seed of Life is what bees use in their honeycombs. It is the strongest of all shapes and has the least amount of surface area. Hence, it requires the least amount of building materials (wax) to construct.

The Seed of Life is a pattern that encompasses both an esoteric and a tangible approach to expressing that which is inexpressible, a mathematical foundation upon which spontaneous creativity can flourish. It sounds contradictory but it works. That’s because it’s what that greatest artist of all uses, Mother Nature herself, as well as her wisest of little engineers, the honey bees.

In January or February of each year, I use the Seed of Life pattern as the foundation for a series of mandala drawings where I symbolically “plant” my goals and dreams for the year ahead. It’s a process I call “seed to seed” and I run workshops to guide others through the same process.

Using this creation matrix is a way of syncing up with Nature’s own growing cycle. It is highly effective because it combines the strength and precision of sacred geometry with natural law and our own innate creativity, just like the old masters did and honey bees still do today.

CJ Shelton is an Artist, Educator and Shamanic Practitioner and the owner of Dancing Moon Designs. She inspires and guides fellow seekers on their creative and spiritual journeys by offering various “circles” of community for artistic and spiritual expression. CJ’s passion and purpose is to open other’s eyes to the meaning, magic and mystery of the Great Wheel of Life. 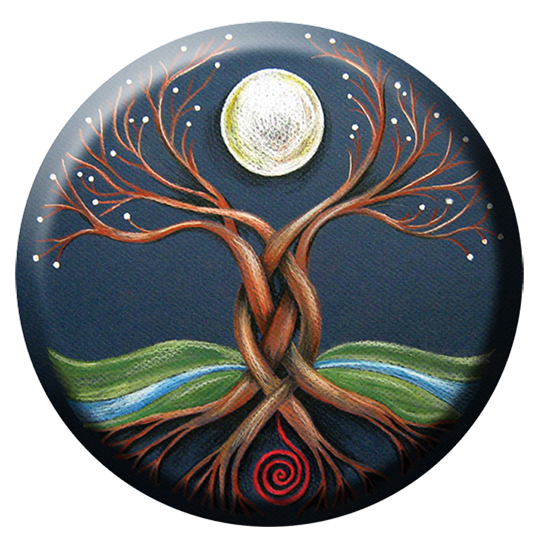